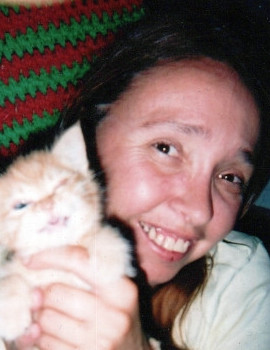 On April 30, 2022, April Burlson died unexpectedly in Jerome, Idaho in a vehicle accident. She was 55 years old.

April is survived by her parents Frank and Barbara, her life partner Randy, her daughter Renee, her stepson Timothy and siblings Shannon, Dorothy, Kimberly, and Frankie. She was preceded in death by Her second husband John Kildare and her son William Kildare-Glahn.

April was born on January 19, 1967, in Newburg, Oregon to Barbara and Lloyd. Her biological father chose to not be present in her life and later gained a stepfather in Frank.

April married Richard Black in 1985. She welcomed her daughter Renee in 1986. They were later divorced. April married again in 1990 to John Kildare. Through John, April gained a stepson, Timothy. Shortly after marrying John, they welcomed another son, William. In 2004, April met Randall Shulsen and spent the remainder of her life with him. She had one granddaughter, Zoe, whom she adored with every ounce of her being. Her smile and laughter would light up a room and her ability to laugh away her own faults made her a special and unforgettable woman. She loved to express herself in her writing. She would write poems and stories. April loved learning to speak Spanish and was proud of how far she had come. She was the kind of person who could make friends with everyone in an instant. April loved animals and was known to collect strays. She would nurse the sick ones back to health and in doing so, gained loyal companions. Like us, these loyal companions will be waiting for the day they get to be by April’s side once again, until then she will remain in our thoughts and in our hearts as a mother, grandmother, daughter, life partner, and friend. Your wings were ready, but the world was not.

A celebration of April’s life and spreading of her ashes will be held May 21st, 2022, at her residence between Jerome and Wendell, Idaho. During this celebration, please feel free to share some of your favorite stories about April.

To order memorial trees or send flowers to the family in memory of April Burlson, please visit our flower store.