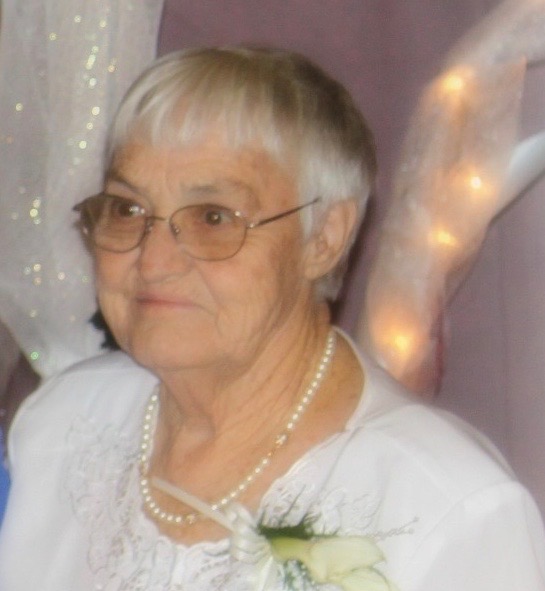 Berniece Robinson Couch, 90, of Jerome passed away on Tuesday, December 4, 2018 in Twin Falls, Idaho.  Berniece Robinson, the 6th of 10 children, was born on August 3, 1928 to Joseph William Robinson and Ella Marie Silcock Robinson in Burley, Idaho.

In 1934 the family moved to Buhl, Idaho and had to live in a potato cellar until their house was finished. Berniece started school there at Lucerne School. In December 1934 they moved to Jerome and started attending Canyonside School for a short time until changing schools and attending Appleton.  In 1935 the family moved to Eden before returning to Jerome in 1936 and attended school at Lincoln for a short time before returning to Appleton. While in Eden, Berniece made memories she would not forget. While her and her sisters where weeding potatoes Berniece happened to hear a rattle snake in her row and went screaming back to the house. It was said her brother could hear her a half a mile away. Once mom learned of what happened they never had to do any weeding in the potatoes again. On another occasion they where herding cattle and one ran across the road getting hit by a car, all while Berniece was standing right behind the cow. The family lived about five miles from town and the kids would often walk home rather then riding the bus.

While being back in Jerome the family attended church at the Homedale Ward that was about five miles from home. Often times they would ride the horses to church. At the age of eight Berniece was baptized by John Stratten.

In 1940 they moved to Pleasant Plains area and Berniece finished the 7th grade and began the 8th. They later moved back to Jerome and she graduated from Lincoln School, and was living there when World War II started. Berniece started high school that next year but that semester broke out with shingles and quit school eventually going back the next year.

Berniece started working at the Jerome Co-Op and Creamery, weighing milk and taking samples. In the summer of 1944 she met James Couch while rolling skating at he Moose Hall. James went into the Army in March of 1945 and came home on leave in August. They where married August 10, 1945 in Elko, Nevada. Berniece worked while Bob was gone until he came home October 26, 1946. On September 5, 1947 their son, Thomas Eugene, was born. They then moved to Eden, where on October 9, 1949 their daughter, Sherryl Lynn, was born. The family then moved back to Jerome in 1952 and on September 30, 1956 their second daughter, Karen Marie, was born.

Besides working at Jerome Co-Op and Creamery, Bernice had many other jobs over the years. She worked part time at the City Market and Anderson’s Bakery. She also worked for the Arctic Circle for nine years and OK Tire doing bookkeeping for 11 years. From 1978 to 2007 Berniece started selling Avon. Also in 1982 she started working at the Jerome Canning Kitchen and 1985 she took over running the kitchen until they closed in 1995.

Bernice had many hobbies and activities she liked to do. She helped her mother with baking and decorating wedding and birthday cakes, which they would deliver all over the northwest. She also loved making chocolates, which she has made for many a Christmas. Making, selling and giving away too many to count. Berniece also loved to bowl. She started bowling in 1992 and was awarded the Jerome Bowling Hall of Fame. She attended the first National Bowling Tournament in Portland, Oregon and later went to San Diego, CA, Salt Lake City, UT, Tucson, AZ, and three times to Reno, NV. Berniece also loved to travel. Over the years she traveled all over the western states, Alaska, Mexico and Canada with her sister and husband.

Due to Berniece’s dislike of the cold weather, service will be held at a later date.

Memories and condolences may be shared with the family on Berniece’s memorial webpage at www.farnsworthmortuary.com.

To order memorial trees or send flowers to the family in memory of Berniece Couch, please visit our flower store.