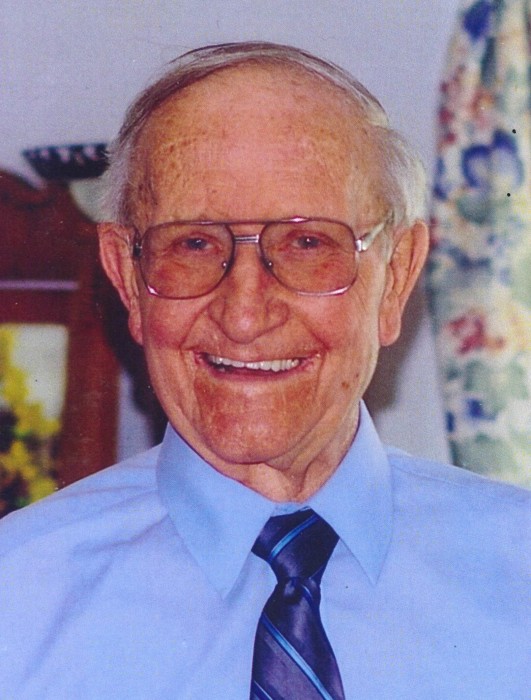 Bill D. Brooks was born near Sturgis, South Dakota on June 18, 1931.  He passed away on October 6, 2018 at home in Twin Falls, Idaho with his family loving him as he went to be with the Lord he had served with such joy all his life.

Bill was the youngest of five children born to Walter and Selma Brooks, having two sisters and two brothers.  After Walter died when Bill was 12, Selma moved the family to Chehalis, Washington.  Bill attended WF West high school where he played football and was the student body president as a senior.  Bill also met his greatest love in high school.  When Patricia Ruth Emerson graduated from WF West, they married on December 2, 1950, and have been married very nearly 68 years.

After high school, Bill worked at the Chehalis airport for five years, then JC Penney for two years.  He then went to the Chehalis Brick and Tile where he worked as the office manager for over 30 years.  When the brick yard closed, Bill sold real estate very successfully due to his gregarious personality and his unquestionable honesty.  He was then encouraged by associates to run for Lewis County assessor where he successfully served nearly two terms until his   retirement.

As a member of the United Methodist Church, Bill was a lay speaker and lay leader for the Vancouver, Washington District of the Pacific Northwest conference.  He served as a lay speaker in several churches including Winlock, PeEll, Elma, Satsop and McCleary.

Bill’s other community activities included Little League and Babe Ruth baseball coaching, the Chehalis JayCees, Chehalis Chamber of Commerce, and the Chehalis Rotary Club, but his greatest love was for his Lord, and his service in the church.

Bill loved to work in his wood shop; many businesses in the community and of course the church have items that he built and donated.  He built a baby cradle when his first grandchild was on the way, and continued on to build 85 more, giving them to any family or friend expecting a new family member.  His last cradle is in the home of granddaughter Keli and Luke Klaas expecting his third great grandchild late in October. The blessed circle of life.

Bill was preceded in death by his sister, Ellen Estes of South Dakota; sister, Irene Harter of Chehalis; brother, Jim Brooks of Portland; and brother, Walter Brooks of Pullman Washington.

To order memorial trees or send flowers to the family in memory of Bill Brooks, please visit our flower store.