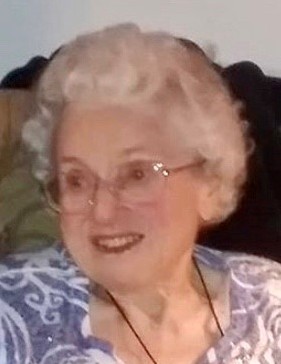 Blanche Elaine Callen Peters was taken home to be with our Lord on March 5, 2020. She died from congestive heart failure in the St. Luke’s Hospital in Twin Falls, Idaho. She did not suffer long and was baking cookies for her sons, playing bridge with her friends, going to her PEO meetings, singing in the church choir, and fixing home-made soup for a sick friend within a week of her death.

She was born on July 7, 1924 at St. Valentine’s Hospital in Wendell, Idaho to Tom and Fern O’Harrow Callen. She was the eldest of 6 children and outlived them all. She grew up on the Callen family farm 5 miles south and 4 miles west of Jerome. She lived in Jerome County throughout her life.

As a child, she learned to read, and she read with a passion all her life. She said her mother would say, “Blanchie, get your nose out of that book and get in here and help me”.

She graduated from Colorado Women’s College in Denver, Colorado at the top of her class in 1944. She grew up on a horse and during her time at CWC she took lessons in English riding and hunter/jumper equestrian competition. She enjoyed this venture so much but was struck down with rheumatoid arthritis and was never able to get on a horse again. She passed her love for horses onto her daughters, her granddaughters, Iliana and Lindsay, and her great granddaughter, Callen.

She married her beloved husband, Ralph B. Peters, on February 12, 1945 during WWII. They were bookends in their service to the Jerome community and their church.

She spent most of her life working part-time as a secretary and bookkeeper for several different entities, Jerome Water Company, Jerome Abstract and Title, the Presbyterian Church (volunteer secretary from 1960 to 2005, 45 years) and the Idaho Housing Agency. It was at the Idaho Housing Agency that she met her friend, Maya, who was a Japanese American and she and Ralph became advocates for the Japanese Americans and were affiliates of the Japanese American Citizen League. They were instrumental in the creation of the IFARM and worked tirelessly to construct the museum grounds and keep it funded. She served on the Library Board for 44 years and was a fixture there checking out several books every week. Ralph and Blanche were both named Chamber of Commerce Citizens of the Year in 1998.

She was a 72-year member of PEO, a women’s organization that promotes the education for women who are seeking a degree at the college level. She served as President and in all the offices of that organization. She was very dedicated to their cause.

Blanche’s greatest love was her love for the Lord. Four days before her death, she struggled up the stairs into the choir loft to sing with the choir which she had been singing in for over 70 years. After the church services she received the day’s donations and took them home and made out the deposit slip for the bank, as she was still the receiving treasurer. She was a member of the church for 75 years. She served as an elder, PW president, secretary, treasurer, and keeper of the faith. Heaven gained an angel when Blanche passed over.

A visitation will be held where friends and family may call from 5:00 pm until 8:00 pm, Friday, March 13, 2020 at Farnsworth Mortuary, 1343 S Lincoln Ave, Jerome. Funeral service will be conducted at 11:00 AM, Saturday March 14, 2020 at the First Presbyterian Church, 262 East Ave A, Jerome with the Reverend Mike Haddox officiating. Interment will follow at the Jerome Cemetery, Jerome.

Blanche’s family suggests that in lieu of flowers, memorials be made in Blanche’s name to the First Presbyterian Church of Jerome, or to a charity of your choice.

Memories and condolences may be shared with the family on Blanche’s memorial webpage at www.farnsworthmortuary.com.

To order memorial trees or send flowers to the family in memory of Blanche Peters, please visit our flower store.