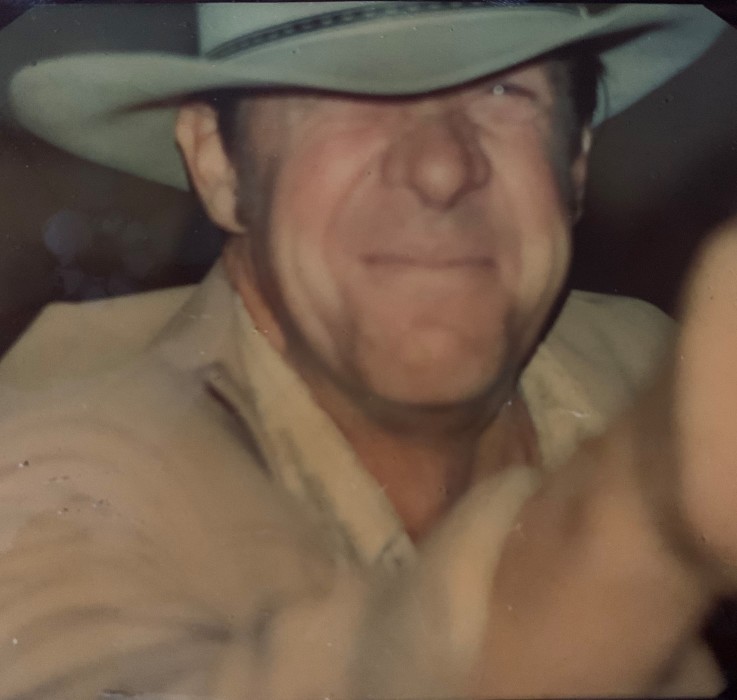 Never a more hardworking man with a story to tell or advice to give.

Charles Jerry Johnston was born to Verda and Charles Johnston in Almo, Idaho where he weighed only 4lbs and they used a shoe box placed in a warming oven of a cook stove as the incubator. He was the oldest of four boys, with three brothers, Mack, Hal and George. He was raised on his grandpa’s ranch where he learned the trade of raising hay and cattle. They did not use pickups, trailers or trucks and in the winter no snow machines, just his horse, Penny, and his dog. The cattle were taken to their other ranch in April which was in Goose Creek and they were gathered to return home to Almo in December.

The family moved to Twin Falls, Idaho into his great grandfather’s house. It would be on a bus heading to school that he would meet his would-be wife, Joyce, as she sat next to him while he remained speechless. Charles graduated high school in February of 1946 proceeded to sign up for the Navy in 1948 to see the world. He travelled all over the Far East and crossed the equator which was a very big deal back them. He served four years and got out in February of 1952 and came home where he reunited and married Joyce Billington on June 11th of 1952 in Twin Falls.

Charles and Joyce moved the family to Richfield in March of 1956, and with his brother-in-law, bought the old Charlie House place. They lived there for 8 years then moved to the Vaden place in the spring of 1964 and farmed the rest of the time there raising their three kids, Bill, Deb and Brad. He really enjoyed farming the land especially when he started running cattle with his brand C lazy J on the right rib.

They sold the farm to his son Bill and moved to town in 1981 where he proceeded to build their forever home in the small town of Richfield. They lived in their motorhome while he was building the house. They went to Alaska for fishing and fell in love with Arizona. They bought an acre in Quartzsite, Arizona and built his winter home so that they wouldn’t have to live through Idaho winters. In 1984, he built an RV park on his own land for his friends down in Arizona so that they would have a place to stay while visiting. The Grand Canyon state would become their winter home for 32 years. He finished the house that his wife designed and took up crafting to be busy which led to travels all over Idaho, Oregon, Montana, California and Nevada. He excelled in his craft of turning bowls outs of burrows, building mining scenes, clocks, boots, bird houses and could always tell you the history of each item he sold or built while his wife made jewelry.

In 2009 they sold their winter home in Arizona and lived year-round in their forever home in Richfield where they continued to sell crafts until they finally stopped just a few years ago. They enjoyed being close to their family.

Jerry’s wife, the love of his life, of 65 years saved his life he always said because he would have been living under a freeway or bridge, or dead in a ditch somewhere if it wasn’t for her.

He had many names.  CJ, Jerry, Uncle Bang Bang, Charlie, but the one he was most proud of was husband, father, grandpa and great grandpa. He was preceded in death by his parents, Verda and Charles Johnston; brothers, Hal, Mack and George Johnston; his daughter, Debbie Rogge; and his wife, Joyce. He leaves behind his sons, Bill (Sharon) Johnston and Brad (Roxie) Johnston; 6 grandchildren and 8 great grandchildren.

To order memorial trees or send flowers to the family in memory of Charles Johnston, please visit our flower store.