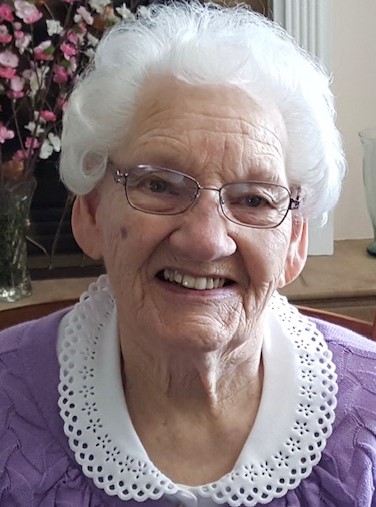 DeLores was born in Gooding, Idaho on April 20, 1922, to Emma Louise Davis and Adolphus Minor Singer. She was the 11th child of 14 children. She attended Gooding schools and graduated in 1940.

DeLores had a happy childhood in Gooding even though she grew up during the Great Depression. She met Ray Hurd Dixon when she was in high school and they were married June 6, 1940 in the Salt Lake Temple. Shortly after their marriage, World War II began. Ray wanted to help in the war effort, so they moved to Los Angeles, California where Ray worked in airplane construction. The years during World War II were difficult because of rationing and blackouts. She was glad to return to Idaho in 1945 where they raised their four children on dairy farms in Wendell and Jerome.

After Ray’s death in 1973. She married Melvin A. Fullmer and lived in Twin Falls and Jerome. She was an active member of the Church of Jesus Christ of Latter-day Saints and enjoyed singing in the choir, and had many callings in the church, mainly secretarial because of her beautiful handwriting and skill as a secretary. She sang many years with the Singing Mothers and the singing group, The Melodians.

She enjoyed flower gardening, crocheting, and crafting. Her family remembers her as being a loving mother and grandmother. Her kind words and hugs will be greatly missed.

She was preceded in death by her husband of 33 years, Ray Hurd Dixon; her husband of 32 years, Melvin Alonzo Fullmer in 2006; her grandson, Eric Scott Winkel in 1997; great granddaughter, Hailey Rae Wuthrich in 2007; and son in law, Jerry Noble in 2014.

A special thank you is extended to the Ashley Manor staff who took excellent care of Mother through her declining health.

A graveside service will be livestreamed from the Farnsworth Mortuary Facebook page, Wednesday, November 18, 2020 at 2:00 pm.

Memories and condolences may be shared with the family on DeLores’ memorial webpage at www.farnsworthmortuary.com.

To order memorial trees or send flowers to the family in memory of DeLores Dixon Fullmer, please visit our flower store.