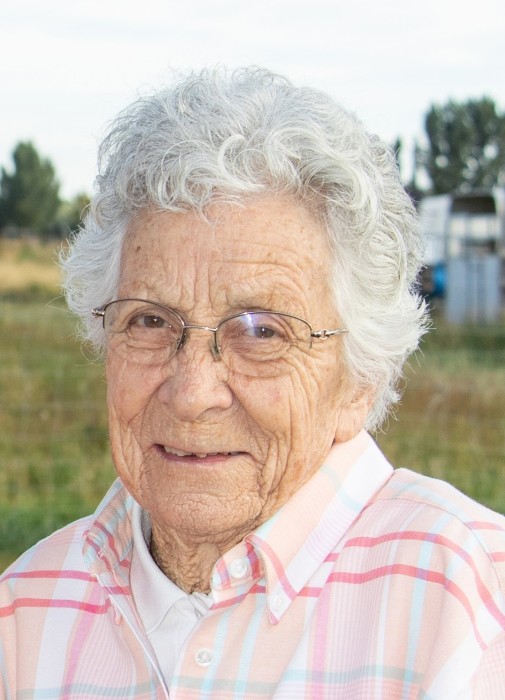 Dorothy Jane Peterson Johnson joined family and friends in heaven on May 20, 2019.  She was born September 27, 1929 in Buhl, Idaho to Ernie and Stella Peterson.  Dorothy’s family farmed in the Murtaugh area prior to moving to Jerome.  She graduated from Jerome High School in 1947 and attended numerous classes at the College of Southern Idaho.

Dorothy married her sweetheart, Ferriel Johnson, March 18, 1951 in Jerome, Idaho.  She worked at the post office in Kimberly prior to starting her banking career.  Dorothy worked at Twin Falls Bank and Trust and transferred to First Security Bank in Jerome.  She retired from the bank after 25 years.  Dorothy worked part time at Producers Livestock in Jerome until retiring 20 years later.

Dorothy was a member of the Methodist Church where she participated in their women’s group.  She was also an active member of the Jerome Bowling Association over 40 years.  She and Ferriel were members of the Friday Night Mixed League for a number of years.  They also made amazing memories square dancing and traveling.  Dorothy enjoyed crocheting, painting, quilting and fishing.  She was also known as a “pool shark” amongst her friends and family.

Dorothy was preceded in death by her parents, Ernie and Stella Peterson; two brothers, Ross Peterson and Callie Peterson; one sister, June Peterson Lynch; and her husband and best friend, Ferriel Johnson.

Grandma Dorothy could no longer say “Oh Sh*t!” when her grandchildren started repeating it.  Her grandchildren thoroughly enjoyed helping her cheat at cards which she did very well.  We will miss her sharp wit, sense of humor and unconditional love.

A viewing will be held from 6:00 pm until 8:00 pm, Monday, May 27, 2019, at Farnsworth Mortuary, 1343 S Lincoln Ave, Jerome. Additional viewing will be held at 10:00 am, Tuesday, May 28, 2019 at Farnsworth Mortuary, with a graveside service to follow at 11:00 am, at Jerome Cemetery.  Friends and family are invited to meet at the Snake River Elks Lodge directly after the service.  Light lunch will be provided.

The family is requesting donations be made to the Jerome Senior Citizens Center in lieu of flowers.

Memories and condolences may be shared with the family on Dorothy’s memorial webpage at www.farnsworthmortuary.com.

To order memorial trees or send flowers to the family in memory of Dorothy Johnson, please visit our flower store.