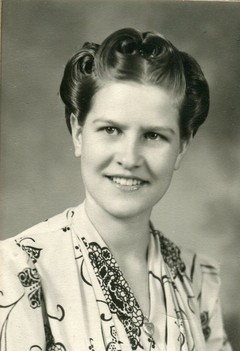 At the age of seven Edna and her family moved from Tarkio, Missouri to Jerome, Idaho where they lived with her grandparents while the family home on West F was built. Edna often told stories of her family's move to Jerome arriving at the train Depot in Jerome while waiting for Grandpa Swift to come with his wagon and team to pick up the family and belongings. Edna was an avid historian and relished writing about the ever changing community. Edna had a unique gift of writing about her personal life and the community with numerous letters that she shared continually with her family and friends.

When Edna was eight she helped her mother Pearl pull a wagon from her home on West F to what is now the 500 block of East Main. They picked apricots off two trees in the Carboun Family garden. Edna liked the idea that her son would build his own family home on this property 85 years later.

Edna was excited when she was able to begin attending school the same year as her sister Lila with both having braids. Lila's hair was thick and lush while Edna's was thin due to a bout of Scarlet Fever. Edna tells of the doctor having her parents put lard on her head to treat the hair loss while her body fought the raging fevers. Lila and Edna may have been small in stature but they were avid learners. Some of Edna's favorite times were volunteering in her grandkids' classrooms helping children with their reading. Edna always remembered struggling with a few points of math herself so she made arrangements to clean the erasers in exchange for tutoring from her favorite teacher. She often said that her attention to tutoring Edna was the reason Edna spent so many hours working as a clerk for Safeway, Kings and Tingwalls.

Edna was a loving daughter, she and her sister Lila planned many family gatherings bringing together many friends and her extensive family for holidays and Sunday dinners. Edna liked to cook dinner for her family, serving dinner in her kitchen at the big house on Main Street and setting up additional serving areas in the garage for Easter and Christmas or picnic outside in the yard. Time after the cleanup was done was often spent singing hymns around the piano. Edna always wanted a grandchild to play the piano. So she was very happy when Nathanael choose to pay for a year of piano lessons with Karolee Gregory as his senior project, Nathanel's final project was a hymn that he had Paul video tape for Grandma.

Edna also enjoyed walking. She walked to and from work and often said she got there quicker than driving. In the 1970's Oscar and Paul taught Edna to drive a car. Paul remembers crawling around the back seat of the car while Oscar took them out for Sunday driving lessons. Although Edna obtained her license she continued to have Oscar drive her to work and would walk back to the house for a quick bowl of soup and hurry back to the sales floor for the remainder of her shift. Many years Edna put together the toy aisle for King's Christmas Sale and Elvina Jensen, one of the owners of King's, personally taught Edna how to make Easter baskets. Edna would give the store manager a list of supplies and she would make hundreds of baskets, for over forty years this was Edna's pride and joy. Many parents came back to the store every Easter just for Edna's baskets. Edna continued to make Easter baskets for the Jerome King's store until they closed their doors when Edna was in her late eighties. When Oscar was ill Mr. Topmiller and Mr. Ostermeyer brought all of the supplies to her house. Edna would meet her friends Helen, Delphina and Willma for a quick sandwich during their lunch break. For many years after retiring when the store staffing was tight they would put Edna on the schedule.

Edna liked to buy the extra jelly beans and brought the little zip locks of jelly beans over to visit the kids. The black ones they would feed to Grandma and the baby dolls as medicine during their numerous tea parties.

On Sunday afternoon following the church service, December 27, 1953 Edna married the love of her life, Oscar William Johnson. Seven years later, at the age of 36, in 1959 she became the mother to Paul Eugene. She was also mom to Oscar’s children from a previous marriage, James and Eleanor. Edna loved to tell about James sitting Paul on top of the refrigerator. She was Grandma Johnson to many in her later years. Edna loved phone calls with her family, going to Golden Corral with James and Mickey and having them stop in to stay overnight on their trips. One of the special memories that we got to share with Edna was James's family stopping by Jerome on their return home from a family reunion with Anna's family and having Tracey, Dawn, Eve and their families with them. Edna also enjoyed contact from Eleanor's family. Charlene brought her kiddos up from Boise to spend an afternoon with Edna, this delighted her. Debbie and Darlene, Lila's daughters, were important to Edna along with Joe's daughters, Linda and Dianna. Joyce and John Wesley were another route of family contact for Edna. She appreciated being included in the family Easter gatherings.

Over the past five years Edna has held her time with Dianne extremely dear to her heart. Dianne was the connection to all of the family that she out lived. Dianne spent many hours working on the Swift-Lawrence family history. The pictures and stories that Dianne collected were precious to Edna, leading to many conversations and phone calls. Dianna often brought Joe and his children to visit Edna. Edna loved to eat a bowl of Campbell’s with a ham and cheese sandwich. Little Debbie Nutty Buddies and Twinkies had a special drawer in the kitchen just like the shelf in the freezer where she had a spot for the Orange Dreamsicle and toffee ice cream bars. Edna had a sweet tooth.

When Edna became homebound Paul would pick Edna up for Sunday church and dinner while the grandkids watered her yard. She would fuss often but enjoyed the time with her grandkids. Faith liked to put Grandma in her wheeled walker and push her home.

Edna loved her Grands, as she called them. Elizabeth, Nathanael, Hannah, Faith and Esther meant so much to her and she would speak of them often. Edna never thought she would become a Great Grandmother since she became a mother later in life. Edna loved visits from little Kanon who usually came into the room looking for “Great Ammie” and always had something new to show her. Edna was very excited every time she was told about the new baby soon to arrive. Krue William missed meeting Great Grandma by hours.

She was preceded in death by her parents, Joe and Pearl Lawrence; brothers, Joe, Wesley, and Jim; sisters, Serena, Lila, Violet, Elsie, and  Mabel; and husband, Oscar Johnson.

By the way, if you listen closely you will hear a choir singing in heaven as her arrival means that all her family are back together again doing what they loved to do here on earth! That would be family reunions, picnics and singing around the piano.

Funeral services will be held at 1:00 p.m. Tuesday April 3, 2018 at Believers Church 100 East D Street in Jerome Idaho. Interment will be at the Jerome Cemetery.

To order memorial trees or send flowers to the family in memory of Edna Johnson, please visit our flower store.