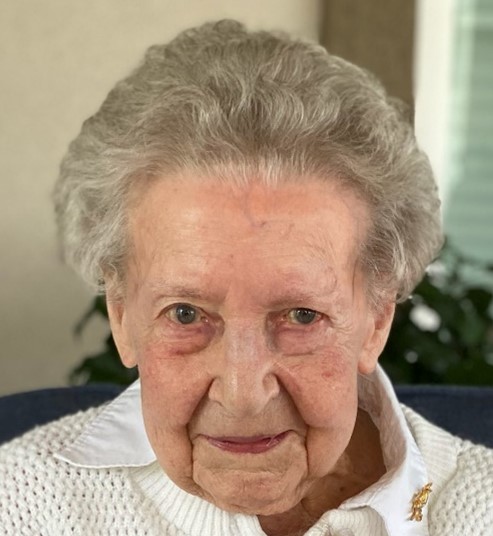 Ethel Florence Hall Jacobia of Twin Falls, Idaho, died at St Luke’s Magic Valley Hospital Thursday, August 27, 2020, after a short illness. After 102 years of mortal life, she was able to peacefully pass into the next life and reunite with her sweetheart and many family members.

She was the 5th of 6 children born January 19, 1918, to Justice Hall and Florence Allen Hall. She was the 5th daughter and was later joined by a younger brother. She was born at home and lived her life in Hoags Corners, New York, until she married Kenneth Howes Jacobia July 15, 1941.

Her childhood through young adulthood was spent in a simple country life with family and friends. When old enough, she worked for her father in his business. He owned and operated an auto mechanic shop, dance hall, bar and grill all housed in one building. It was in a very rural setting, but the businesses were popular with people coming from miles around for the dances. That is where she met Ken. He had graduated from Chatham High School, but she was still a senior at New Lebanon Central High School when he came to a dance with some friends including one of Ethel’s older sisters. At first, she rejected Ken’s invitations to dance, but soon warmed up to him.  For the years they dated and many years of their marriage, dancing together was a highlight for her. She reminisced of those times throughout the rest of her life.

She and Ken settled in Malden Bridge, New York, near where he worked. Their life was interrupted while Ken served in the U. S. Army during WW-II. During those years she lived part time with her parents and part time with Ken’s parents. After the war they settled back in Malden Bridge and in 1949 moved into a new home where she lived until 2011 when she moved to Twin Falls, Idaho, to live with her son Carl and daughter-in-law Dorthy. She really wasn’t able to live alone anymore and realized that moving away from the area where she had spent 93 years was necessary; but it left a void. She never complained, and as she had always done, quietly accepted the circumstances life brings. Her sweetheart Ken had died in 1980 and she had been without the love of her life for over 40 years at the time of her death.

During the years her grandchildren were growing up, they all lived in Idaho and could only occasionally visit her in New York. She did travel west a few times, but actually only got to meet many of her great-grandchildren after moving to Idaho.

In her married years and widowed years in Malden Bridge she was active in the Tri-Village Fire Auxiliary, American Legion Auxiliary, Malden Bridge Community Club and fundraising for the local Methodist church. She also was an avid bowler into her 90’s. At age 92 she was still driving and participating in two senior bowling leagues simultaneously, and was an active participant in meals and activities at a local Senior Center.

Ethel was a quiet, unassuming personality who always tried to be kind and friendly to everyone she associated with. She is survived by her only child Carl (Dorthy) Jacobia, Five grandchildren, Jamie (Steve) Bowers, Jason (Sara) Jacobia, Jennifer (Blake) Crockett, Brian (Jami) Jacobia, and Brandon (Brandie) Jacobia, 27 great-grandchildren and 1 great-great-grandson.

At her request her body was cremated, and at a future time, when conditions allow, those ashes will be interred next to Ken’s grave in the Old Chatham Union Cemetery, in Old Chatham NY.

To order memorial trees or send flowers to the family in memory of Ethel Jacobia, please visit our flower store.