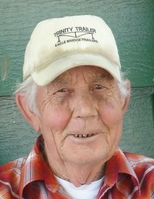 George B. Drain, 89, of Jerome, Idaho left us on June 7, 2022, after a valiant fight with COPD. He passed peacefully in his home with his family.

George was born to Loy and Ruth Drain in Pryor, Oklahoma on January 29, 1933. The family was headed to California in 1945, stopped in Jerome to visit family, and never left. He married Carolyn Perry in 1952. They were later divorced. He married Elizabeth Wetzstein Newberry in 1959.

George and Betty raised their blended family on the farm south of Jerome where he resided until his death. He farmed the 80 acres with his father, wife, and children. Dad had always had at least one other job. In his younger days, he owned a gas station, helped train stunt horses in California, and served two years in the Army. He later built houses, worked in potato manufacturing, the county weed department, and finally rode ditch for the North Side Canal where he retired at age 65. His great love was raising registered appaloosa horses.

He was preceded in death by his wife; parents; sister, Marie Snook; daughter, Ceceile McBenge; and grandson, Michael Turner.

A Celebration of George’s Life will be held at 11:00 am, Friday, June 17, 2022, at Farnsworth Mortuary, 1343 S Lincoln Ave, Jerome. Graveside service will conclude at the Jerome Cemetery.

Memories and condolences may be shared with the family on George’s memorial webpage at www.farnsworthmortuary.com.

To order memorial trees or send flowers to the family in memory of George Drain, please visit our flower store.