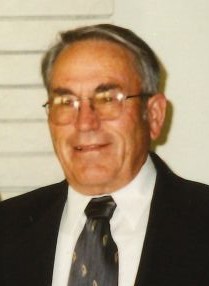 Jack was born February 26, 1928 in Jerome. He graduated from Jerome High School in 1946 as the Senior Student Body President. Jack enlisted in the Navy and served from 1946 till 1948. He was stationed at Corpus Christy, Texas and was a navigator on PBY seaplanes. Jack was awarded the WWII Victory Medal, Honorable Service Pin, and Honorable Discharge Pin.

Upon his discharge from the Navy, Jack returned to farming southeast of town. During this time, he met his wife, Maxine Toolson on a blind date. They were married in Twin Falls on October 29, 1949. From this union, three sons were born.

Jack loved farming and spent the next 48 years farming southeast of Jerome. During this time, he was awarded the Water Guardian Award for Idaho Water Users. He served as Jerome County Farm Bureau president from 1974-75 and served on the Farm Bureau State Board of Directors from 1976-97. He was also appointed to the Idaho Bean Commission where he served two, four-year terms. After he retired from farming, he stayed busy working at the Idaho Farm Museum.

You always knew where he was on the farm because he always whistled a song.

Jack and Maxine were sealed for all time and eternity in the Twin Falls Temple on October 2, 2016.

Jack was preceded in death by his two sons, Randy and Scott; his parents, Jake and Flossie Bell; and brother, Robert Bell.

Funeral service will be held at 11:00 am, Wednesday, May 5, 2021 at the Church of Jesus Christ of Latter-day Saints, Jerome Stake Center, 26 N Tiger Dr, Jerome, with a viewing beginning at 10:00 am. Grave dedication will conclude at Jerome Cemetery.

As a courtesy to family and guests, attendees are asked to wear a face covering or mask.

Memories and condolences may be shared with the family on Jack’s memorial webpage at www.farnsworthmortuary.com.

To order memorial trees or send flowers to the family in memory of Harvey "Jack" Bell, please visit our flower store.