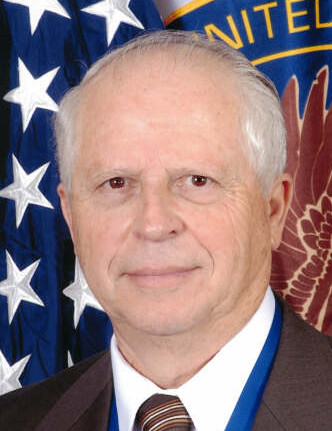 Joseph Emery Eyre, of Buhl, previously of Jerome, died at home surrounded by his family on May 3, 2022.

Joe was born to John E. Eyre Jr. and Evelyn Sutherland Eyre Goerke on August 7, 1937 in Grainton, Nebraska, a very small farming community out in the wheat country. His father was a teacher and shortly thereafter the family moved to Olathe, Colorado where his father died as the result of a traffic vehicle accident leaving his mother with Joe, his older sister Alberta, and his two-month-old brother Mike. His mother then moved the family to Gillette, Wyoming to be closer to family. His mother met Harry Goerke and a year later they were married. At that point, the family moved to Boise, Idaho where Harry was stationed at Gowen Field before being shipped out to the Pacific Theater for three years during World War II.

Upon Harry's return, they purchased a business in the Deer Flat community outside of Caldwell, Idaho and built a house in the small community of Houston, Idaho where Joe grew up. Joe attended elementary and junior high in the local four-room schoolhouse and high school in Caldwell graduating in 1956. He then attended the University of Wyoming in Laramie, graduating in 1961 with a bachelor's in Political Science and a minor in History.

Joe met his wife, Bonnie Haynes in high school. They were married on November 18, 1957, in Laramie, Wyoming. To this union four children were born, John, David, Daniel, and Julie. He worked for the Union Pacific Railroad while attending the University in Laramie, working the midnight to eight shift and attending classes during the day. After graduation from the University, the family moved to Spokane, Washington where Joe was employed as a Management Trainee for JC Penney. After a year with JC Penney, he went to work for the Old National Bank and then moved on to the National Bank of Washington where he was a Vice President and Manager of a local branch until 1971, when he moved the family to Boise, Idaho to work for the Bank of Idaho as Vice President and Manager. His subsequent bank assignments took him to the Wilder Branch and then to the Jerome Branch, where he spent the next 10 years. In 1976, he and Bonnie purchased the Jerome Bowl which they remodeled and updated from eight lanes to 12 lanes. After selling the Jerome Bowl in 1980, Joe went into business for himself as a financial consultant meeting and working with people across Southern Idaho.

Joe enlisted in the Wyoming National Guard in February 1959 and was commissioned a 2nd Lieutenant in February 1961. He transferred to the U.S. Army Reserve after moving to Spokane, Washington. He had a long and active Army Reserve career ending after 38 years in 1997 with the rank of Colonel. He was a graduate of the Army Engineer Officer Basic and Advanced School at Fort Belvoir, Virginia, and was an instructor there for two summers and a graduate of the Army Command and General Staff College at Fort Leavenworth, Kansas. He was Company Commander of C, B, and D Company, 321st Engr Battalion; S-2, 321st En Bn; Deputy District Engineer, Omaha District; Operation Officer, FEMA Region X; Acting CO, Yakima Firing Center; Evaluator and Special Projects Officer, U.S. Army Corps of Engineers; Deputy Engineer Pittsburgh District; Headquarter Deputy Chief of Staff, U.S. Army Corps of Engineers and IMA Program Chief, Military construction programs. His extended army tours took him to many locations, including assignments in Washington D.C., as the Deputy Chief of Staff in Military construction and Reserve Affairs. In 2000, he was selected to be the first Army Reserve Ambassador for the state of Idaho, representing the Chief of the Army Reserve, and was appointed to Emeritus status in 2010. In 2018 he retired and was appointed Army Reserve Ambassador Emeritus for life. During his military career, Joe received many awards and decorations including the Legion of Merit and two Meritorious Service Medals for his work before, during, and after the Desert Storm operation, where he worked in the National Military Command Center. He also received the Engineer Regiment Bronze de Fleury Medal for his career efforts to the Corps of Engineers.

Joe was active in various community organizations. He was a member of the Spokane, Washington Jaycees and Kiwanis, a Boy Scout Cub Master, Jerome Chamber of Commerce, a charter member of the Jerome Optimist Club, past President Jerome Rotary, past President St. Benedict's Hospital Foundation, and served several years on the Jerome County Planning and Zoning Committee, Precinct Committeeman for several years, member of Jerome Post 46 American Legion, and a Lifetime member of ROA and AUSA. He was a charter member of the Jerome High Desert Drifters Good Sam RV Club where he and Bonnie spent many years camping with this wonderful group in the mountains of Idaho. He was also named outstanding coordinator for Sen. Mike Crapo and received the Above and Beyond volunteer of the year award for region V, Idaho ESGR committee.

Joe is survived by his wife of 64 years, Bonnie; sons, John (LuAnn) of Tucson, Arizona; David (Sonia) of Parker, Colorado; and Daniel (Laurie) of Buhl; daughter, Julie (Mike) Frings of Buhl; nine grandchildren; eight great-grandchildren, with one due in August and one in November; sisters, Alberta Beguhl of Jerome; Helen Goerke of Caldwell; and Margaret Goerke of Ontario, Oregon; brother, Tom Goerke (Larisa) of Grand Junction, Colorado; sister-in-law, Edwena Eyre of Boise; and several nieces and nephews.

Memories and condolences may be shared with the family on Joseph’s memorial webpage at www.farnsworthmortuary.com

To order memorial trees or send flowers to the family in memory of Joseph Eyre, please visit our flower store.