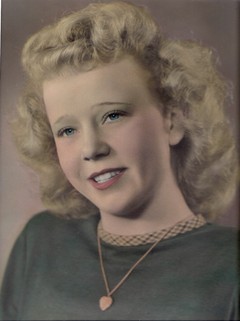 When you think of a tough old bird, Joyce hopefully comes to mind, if you were lucky to have known her.

Joyce Ada Billington graced her parents Geneva & Leonard Billington on November 25, 1930 in Jerome, Idaho. They moved to Twin that same year. She and her brother AT were the best of friends and her his constant shadow. Wherever he decided to go there she would be, feeding the calves, milking the cows and outrunning the turkeys. She graduated in 1948 from Twin Falls High School where after school she worked at the Safeway's store. Joyce met the love of her life and future husband Jerry Johnston on his first school bus ride where she sat with him to school. Although they only dated for a short time, as life’s journey lead them in different directions. By destiny and years later, they reconnected after Jerry left the Navy and married the 11 th of June, 1952, making Jerry the father to Joyce’s son Bill.

Eventually in 1956 Richfield, Idaho became their home where they farmed the land, Joyce drove tractors, helped milk the cows and worked as a teller at the Richfield bank. They expanded their family welcoming Deb and Brad. When the kids had finally grown, they moved into the town of Richfield where Jerry built their forever home. When Bill bought the farm 1978, they were no longer confined to stay so near home and spread their wings. They set their sights on traveling to Alaska for fishing, mining gold and sightseeing back east in their motorhome.

Joyce and Jerry were creative and skilled at crafting. They started selling crafts about 20 years ago and would pick-up their orders when they would came back home from being snow birds every winter in Quartzsite, Arizona; their home of 32 years. From necklace to earrings to the unique items like pogs, crystals and hand-crafted mining scenes and customized solar lights; they always loved telling the history behind their crafts. Their secret was having something no one else had ever seen before. It didn’t matter if you were just passing by their booth, Joyce always had a smile and loved to share and listen to the stories of her friends and family. She loved her time away from home with Jerry in Jackpot playing her favorite game the penny slots but, most of all family was the most important. Family gatherings and holiday’s allowed her to bask in their stories, growth and achievements, allowing her to share some of her wisdom onto her family. She wanted her family to know and remember their roots and history.

Joyce was married to the man she forever loved for 65 years. She was given many grand and great-grandchildren, expanding the love she shared. Her soul will be forever missed, and heaven has gained another angel. Joyce joined the spirits of her brothers Leon, AT Billington and her daughter, Debbie Rogge. She is survived by her devoted husband Jerry, her sons Bill (Sharon) and Brad (Roxie) Johnston, 6 grandchildren and 8 great-grandchildren.

Memories and condolences may be shared with the family on Joyce's memorial webpage at www.farnsworthmortuary.com.

To order memorial trees or send flowers to the family in memory of Joyce Johnston, please visit our flower store.