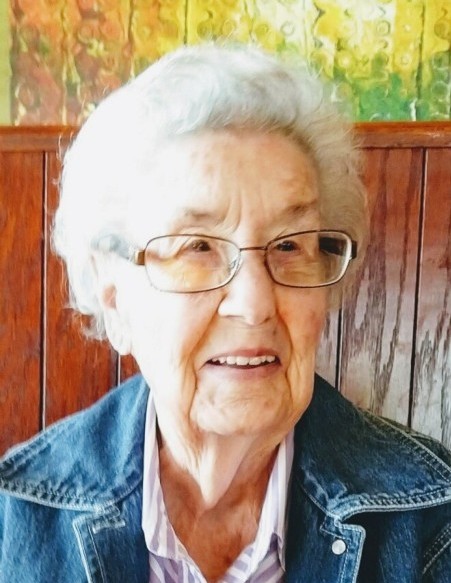 Mom's parents died when she was very young, her father when she was just two and a half years old and her mother when she was nine.  June and her sisters were raised by their grandmother, Retta Ann Bloomfield, in the small mining town of Zincville, OK.  Mom used to tell stories of how the girls would play on the enormous chat piles that were the remnants of mining.  Chat is like gravel.  We were also told about the girls walking at least one mile to school when they were very little, I am sure it was up hill both ways according to some of the stories.

Mom was quite the storyteller; she could spin a yarn with the best.  One of our most favorite stories was how her and Dad met.  Mom's first husband, Eugene Kelley, had died in a car crash just after his release from the Marine Corps at the end of WWII.  They had a son, William “Billy” he liked to ride his bicycle up and down the sidewalk in front of the house they lived in. Donald “Don” was washing his car, he had Billy pull over and he helped Bill wash his bike, all the time pumping him for information about his mother.  Once Don had gathered enough information, he drove his car up to where June lived and proceeded to pull it into the driveway, where Mom was standing.  He drove his car in so far as to push her into the bush at the end of the driveway and pinned her there using the car.  The story continues that Dad jumped out of the car and asked June to go on a date to the carnival that was in town.  Mom playing hard to get said she already had a date for the evening.  The date was Billy.  So, they ended up meeting at the carnival and rode the Ferris Wheel and that was the beginning of an almost 66-year marriage and adventure.

Mom liked to try new things, she learned to drive a car, water ski, fish, snowmobile, drive a tractor, and navigate their traveling adventures.  Mom said she had been to every one of the lower 48 states, to include Canada, and Mexico. They had traveled from Southern California to Maine and Florida to Washington. Some of the sites she visited included, the White House, Liberty Bell Square, The Smithsonian Museums, Statue of Liberty, The Giant Redwoods, Grand Canyon, Four Corners, Pikes Peak, Old Faithful, and many many more places across the US.

Mom and Dad were charter members of the Magic Valley Snowmobile Club in the early 1970's. They were also part of Snowmobile Search and Rescue.  Once they had retired from working as custom farmers with their son, they wintered in Arizona for many years.  In 1996 Don and June built a home in Kimberly with the help of their children and some of their grandchildren.

Mom missed Dad fiercely after he passed and longed for the day they would be together again.  During Mom's later years she developed old age dementia. The family would like to thank her personal caregivers that allowed her to stay in her home up to the end. The Doctors, Nurses, and care staff at St. Luke's, Twin Falls for the loving and compassionate care that she received.  Mom was a spitfire up to the end.

At mother’s request there will not be a service.  June's cremains will be interred next to Don's at the Martin Cemetery near Centralia, Oklahoma, later this fall on October 16, 2020, what would have been Mom and Dad's 72nd wedding anniversary.

In lieu of flowers or memorial cards, please consider a memorial donation in June’s name to any local humane society.

“And now these three remain: faith, hope and love.  But the greatest of these is Love.”  1 Corinthians 13:13

Memories and condolences may be shared with the family on June’s memorial webpage at www.farnsworthmortuary.com.

To order memorial trees or send flowers to the family in memory of June Post, please visit our flower store.