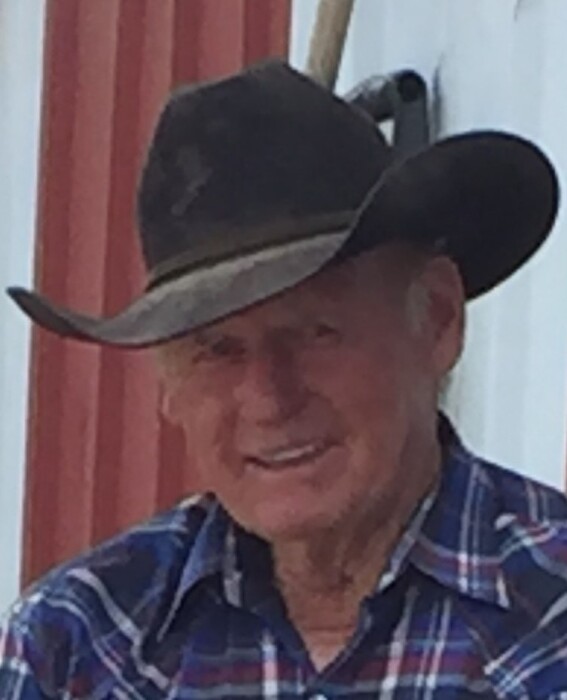 Kenny Kimball fell asleep in death at noon on Wednesday, February 24, 2021.  He was at home and surrounded by his family at the time of his peaceful passing.  His doctors felt that Covid 19 triggered the long illness that finally took his life.

Kenny will be remembered as a real cowboy.... a man who trained horses and knew cattle, loved to rodeo and could rope with the best of them.  He also enjoyed hunting and fishing with his family and friends.

Born in San Jose, CA and raised on a ranch in Carey, Idaho, Kenny was the son of Harold and Mary Keeley Kimball.  His father, “Hank” Kimball had been a successful saddle bronc rider and Kenny wanted to be just like him.  Harold taught his ten children to tend the crops with teams of horses, and how to milk the cows and raise hogs, sheep and chickens.  He tried to discourage Kenny from pursuing his passion for rodeo, by teaching him how to ride and handle horses and break colts.  Kenny was determined and he broke colts and bucked hay to pay his way to rodeo in the late 1950’s and early 60’s.  During this time Kenny Moates, who was an avid racehorse trainer, began teaching him how to gallop and train racehorses.

His talent for starting young horses was noticed by Wayne Peterson, a well- known horse trainer in Sun Valley who specialized in training cutting and reining horses.  Kenny was expanding his knowledge of horses and began to show and shoe the horses Wayne had in training.  After Wayne left, Kenny became the head trainer at the Sun Valley Horsemen Center.  It was at this time that Kenny met his wife, Mary Boulton, who was hired as Director of the riding school at the Center.

Both “Horse Crazy”, they became good friends.  She was as well trained in the English riding disciplines of Jumping and Dressage as he was the Western riding disciplines.  They decided to join hearts and married in 1971.  In just a few years they opened two other horse operations in the area.  Kenny managed them all and trained racehorses on the side.  Mary gave birth to a son, Kyle (who followed in Kenny’s footsteps in some ways and became a roper, horse trainer, packer and hunting guide).  Together Kenny and Mary bought land south of Bellevue, Idaho and moved the operations there to develop Horsewise Enterprises, a multi-faceted training operation training horses and riders in seven disciplines.

Kenny pursued horseracing, becoming a well-respected trainer in the northwest, winning many Stakes races and breaking a few track records along the way.  During the winter months, Kenny also raced horses with chariots, driving many teams to victory with trophies to follow.

He later took a break from race training to work for a large ranch as “cow boss” for eleven years.  During this time, Mary started a resident school for young people who wanted a career with horses.  Kenny taught the western disciplines, often taking students with him to ride long days moving cattle at the ranch.

After retiring from the ranch position, Kenny came out of retirement at age 77 to pursue his real passion, training racehorses again.  It was in his third year after returning to race training that he became ill.  Despite his declining health, Kenny finished the race season and was determined to get well.  He was an inspiration to his family and doctors with his positive attitude.

Kenny even made time in the last year to develop his spiritual side.  He enjoyed studying the Bible and died with the hope of being resurrected (Acts 24:15) back to earth (Ps 37:29) with Jesus Christ as king.

Kenny is survived by Mary, his wife of forty-nine years; son, Kyle; daughter-in-law, Deborah; brothers, John and Lawrence (Darla); his sister, Ramona; and many cousins, nieces and nephews; as well as his stepson, Dan Parks and step daughter, Jolene Parks.

Preceding him in death were his parents, Harold and Mary; and his siblings, Weaver, Max, Eddie, Bernese, Pat, and Elda.

A Celebration of life for Kenny will be held on Zoom at the following link:  https://www.facebook.com/kenny.kimball.56

Memories and condolences may be shared with the family on Kenny’s memorial webpage at www.farnsworthmortuary.com.

To order memorial trees or send flowers to the family in memory of Kenneth "Kenny" Kimball, please visit our flower store.