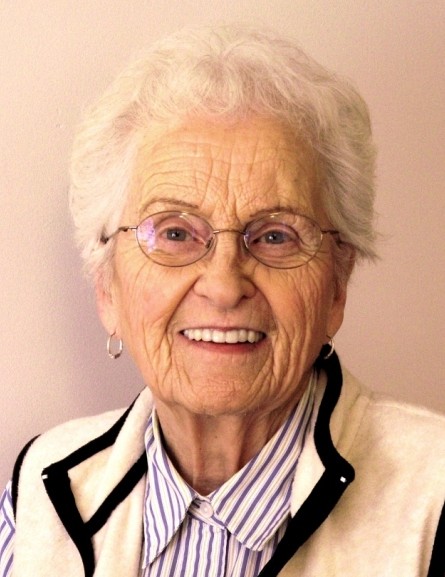 She was born to parents Roy and Irene (Adams) Williams at Little River, Kansas on October 3, 1926.

Lulu Mae attended and graduated from the Little River High School in 1944.  She attended Emporia State Teacher College that summer and was hired to teach at Libby elementary school where she had attended first through eighth grade.  She was in 4-H all of her school years and won the coveted state leadership award for a trip to Washington D.C. in 1945.  In 1946 she married Elmer Correll after he was honorably discharged from the Army.  They lived at Little River and their son, Charles, was born there.

Elmer had promised to take his family to Idaho to visit Lulu Mae’s sister and her husband, Nellie and Virgil Lickley.  In October of 1948 they and Lulu Mae’s mother and father made the journey by car to Idaho.  Little did they know this trip would dictate what the rest of their life would become.  They stayed in Idaho even though the big snows and cold weather were a challenge.  Lulu Mae was hired to teach at the Falls City School but the next year she was pregnant with daughter, Charlene, and had to resign. (Not allowed to teach if you were expecting!)  But she continued to pursue her education and received her degree from Idaho State University.  She taught at Eden, Dietrich and then for 17 years at Wendell before retiring.

She enjoyed music, playing the piano, and her yard and flowers.  Her membership in the Methodist Church, United Methodist Women and Delta Kappa Gamma (a professional teacher’s organization) were of importance.  She and Elmer enjoyed many years of square dancing with the Buttons and Bows.  In later years, many hours were spent at the Jerome Senior Center.  But the most important accomplishment and satisfaction of her life was seeing her children and grandchildren become adults.  Children are:  Charles (Lynn) Correll of Jerome, and Charlene (Aaron) Hadden of Pilot Rock, Or.  The grandchildren are Sarah (Ken) Carroll of Boise, Ann (Trent) Munden of American Falls, and Brett Hadden and Rita Rosenberg of Pendleton, Or.  Great grandchildren include Evan, Morgan and Jordyn Munden and Griffin Rosenberg and Caysen Hadden.  She always appreciated the contacts with all her nieces and nephews.  She loved you all.

Elmer passed away in 1996, and she and Leo Coates were married in 2001.  So now she had two more to add to the fold:  Dale (Liz) Coates of Colorado and Larry (Lois) Coates of Utah plus four step-grandchildren.  Lulu Mae and Leo often commented how lucky they were to have such wonderful families.

She was predeceased by all her siblings: Nellie Lickley Lattimer, Edwin Williams, Pauline Splitter, Margarette Zimmerman and Clifford Williams.

There will be a private family service and a celebration of life at a later date.

Memories and condolences may be shared with the family on Lulu Mae's webpage at www.farnsworthmortuary.com

To order memorial trees or send flowers to the family in memory of Lulu Coates, please visit our flower store.