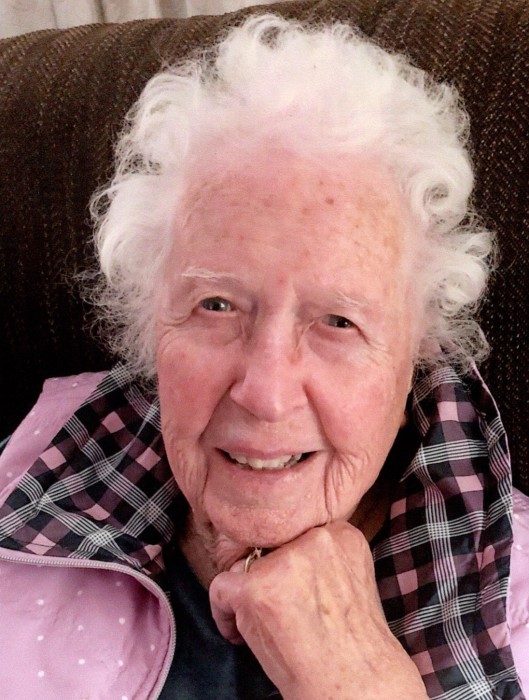 Mom was born August 11, 1923 in Vancouver, Washington to James and Carrie Ramey.  In her early years she attended Providence Academy and St. James Catholic Church and lived on East 29th St. in Vancouver, Washington. Mom and her eight brothers and sisters Joan, Adrian, Dorothy, Pat, Margie, Betty, Carol and Dick moved to Manor, Washington near Battle Ground where Mom eventually graduated in 1943 and was a cheerleader for the Battle Ground Tigers, which she was certainly proud of. All of us grew up listening to her favorite cheers, like Rif Raf Ree, kick um in the knee, give um the axe the axe the axe and on and on.  Mom always spoke fondly of her years at Battle Ground and reminisced about graduation night and being in a car that rolled over while Wally Barker was driving on a gravel road near Dollar Corner.  She talked fondly about the Kaufmans, Kielmans, Petersons, Cawleys, Hollbrooks and many other families.

After high school, Mom was a Rosie the Riveter in the Vancouver, Washington Shipyards where she met more lifelong friends.  Mary Ellen was beautiful inside and out and her friends knew that, and she was very approachable. Back in the day, Mom’s generation listened to the Big Bands at Jantzen Beach and other venues around Clark County and Portland. It was at one of those dances in Hockinson, Washington at the Finnish Hall where she met the love of her life, Simon Roth. The story goes that Simon dressed to the “nines” and driving a 1940’s type fancy car pulled into little ole Hockinson with his buddies from Portland.  Mom and dad eventually fell in love and married in 1943 at St. John Catholic Church.  Mom was not sure what she was getting herself into, eight kids later, a hundred cows later, hired men and a house full of holes, Mom rolled up her sleeves and made a house full of love!  We were raised on pancakes and love, she would say. All eight of her children were Baptized, received Holy Communion and Confirmed into the Catholic Faith, which was the foundation of Mom’s life until the day she died.

Over the years, family members returned to the farm near Hockinson and Simon found a way to include them in the farming operation.  Unfortunately, Simon passed in 1999 after only four years in Idaho, but he was able to see a dream come true by building a brand-new beautiful dairy called Si-Ellen Farms, a combination of Simon and Mary Ellen’s name.  After Dad passed Mom took on the role of a true family Matriarch.  Mom lived in a home on a hill overlooking the dairy.  Mom was inducted into the Idaho Livestock Hall of Fame. She received the Innovative Dairy of the Year Award, which is a prestigious national award for innovation and sustainability and many other industry related accolades.  All of her accomplishments meant something to her, but none meant more than her family or helping others who needed a boost.  To Mom, money was a means to help others not herself; she supported her Catholic Church, Voices Against Violence, a woman’s shelter in Twin Falls, Idaho, and other charities of her choosing.

Mom’s grandchildren loved her unconditionally and she treated each one equally.  One of her greatest gifts was acceptance, and she may have had eight children of her own but was a mother and grandmother to so many more. Doug, Gary and Larry, Alice, Johnny, Tom, Terry, Rodney, Guy and Jim and so many hired men who Simon would pay $5.00 a day and all the pancakes they could eat.  Mom and Dad were a great team and wonderful parents. They both had a sixth sense about people and how they could help them, probably from their humble beginnings, their faith in God, and being from the greatest generation.  We also believe that because Mom and Dad were farmers, they understood there was a time and a place for everyone and everything, a time to seed, a time to water, a time to harvest, a time to live and a time to die.

Mom passed October 9, 2019 at 5:30 P.M. in Jerome, Idaho in her home with all eight children, and many grandchildren by her side.  Mom’s body left us, but her soul and spirit will keep us. “Hail Mary” full of grace the Lord is with you.

Funeral Mass will be celebrated at 11:00 am, Monday, October 21, 2019 at St. Jerome Catholic Church, 216 2nd St, Jerome.  A luncheon will follow in the parish hall. The Roth Family will be holding a graveside service in Vancouver, WA in the Spring of 2020.

The family asks that in lieu of flowers please donate to The Monastery of the Ascension in Jerome ID, St. Jerome Catholic Church, in Jerome ID or Voices Against Violence, a women’s shelter located in Twin Falls ID. If you still wish to send flowers, please have them sent to St. Jerome Church.

Memories and condolences may be shared with the family on Mary Ellen’s memorial webpage at www.farnsworthmortuary.com.

To order memorial trees or send flowers to the family in memory of Mary Ellen Roth, please visit our flower store.