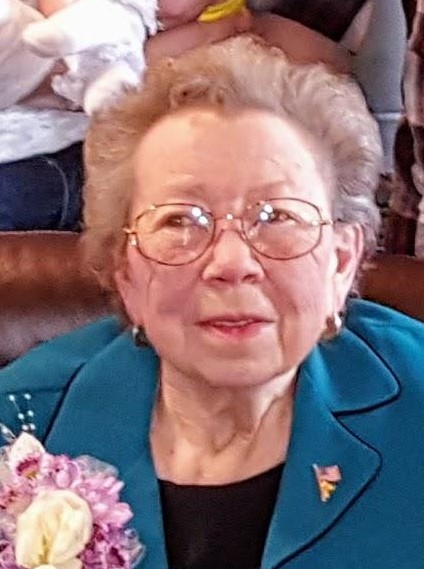 Persis Alice Weston, 83, of Jerome passed away surrounded by family on June 1, 2019. She was born February 23,1936 just west of Jerome in a small lava rock home. She was the 4th of 5 children born to Harvey Wells Dixon and Persis Alice Tinker Dixon. She spent her earlier years moving around the Magic Valley and attending the Washington School in Jerome.

While in the Magic Valley she spent many days on her grandfather’s farm running a team of horses and a hay rake during the season. She moved to Pocatello when her father got a job with the Union Pacific. It was there that she attended Pocatello High School where she met the love of her life and high school sweetheart, John Russell Weston, Jr. They dated throughout high school where she played the saxophone in the marching band.

They were married on October 14, 1954. Their marriage was solemnized in the Idaho Falls Temple. When they decided to get married, they began to build a home and it was made from railroad ties. They both worked 5 to 6 jobs at one time to make ends meet, by the end they did just that. In 1960, they moved to Twin Falls where she worked at the drive-in theater. Then in 1961 they both decided that John would join the Army.

For the next 21 years she followed him halfway around the world to the many duty stations he had. As a wife of an officer, there were many duties the she had to fulfill. One of those was being first lady of the battalion in Fort Riley, Kansas. She always kept the home fires burning and kept the families together while John was in Vietnam.

In 1971 she moved back to Jerome where her family lived. She worked at Tupperware and was the first modeling coordinator hired by the company. In 1975 they retired and made Jerome their permanent residence. There was practically nothing that she couldn’t accomplish, and it seemed like when some one had an idea, she would make it a reality. She could cook anything with her specialty being baking cookies; which you could find her on any early morning making the cookies that her family loved. She enjoyed crocheting and made each of her children crocheted tablecloths that she presented to them on their marriage. She loved to fish and would congratulate anyone on their catch and then they could see how full her stringer was. When it came to hunting, she shot her fair share of deer and elk, which in the early days was purchased in Mackay where she and her family built a “cabin”. She enjoyed spending time there, where she could sit outside and watch the mountains and wildlife.

She always felt that one’s heritage was important in life and instilled this into her children through many stories of their ancestors and genealogy.

She was preceded in death by her parents; brother, Frank Dixon; and grandson, Steven Bryant.

A viewing will be held from 6:00 pm until 8:00 pm, Wednesday, June 5, 2019 at Farnsworth Mortuary, 1343 S Lincoln Ave, Jerome. Funeral service will be held at 11:00 am, Thursday, June 6, 2019 at the Church of Jesus Christ of Latter-day Saints, Jerome Stake Center, with viewing beginning at 10:00 am. Graveside dedication will conclude at Jerome Cemetery.

Memories and condolences may be shared with the family on Persis’ memorial webpage at www.farnsworthmortuary.com.

To order memorial trees or send flowers to the family in memory of Persis Weston, please visit our flower store.