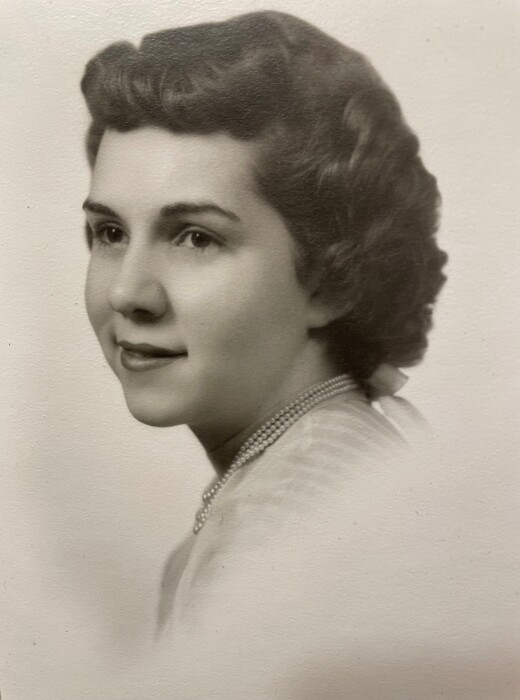 Rosemary McGonigal, 87, of Jerome, Idaho entered into eternal life Sunday, at her family home in Jerome.  She was born to Aloys and Alice Marshall Hof in 1934, in Jerome.  She graduated from Jerome High, Class of 1952.

During her early years, she traveled quite extensively and some of her favorite trips were to South Bend, Indiana for Notre Dame football games and to see her brother, Charles, who attended Notre Dame. She loved Notre Dame and would have attended there had it not been an all-men’s school at the time.  Rosemary received offers from all over the nation and ultimately, she chose Loretto Heights all-girl’s Catholic College in Colorado where she earned a bachelor’s degree in education.  She remembered her college days fondly.  A fun memory of Rosemary’s was during their Christmas banquet, the Bishop would grant them extra weeks for vacation much to the chagrin of the nuns, and Rosemary and all of her friends would scream with delight.

After college, Rosemary and her best friend, Mary Powers, moved to San Francisco to teach.  They lived and worked together for a few wonderful years.

She went back home and taught in Twin Falls until 1964 when she accepted a teaching job in Bellevue, Idaho.  John McGonigal’s mother, Mary Brown McGonigal, had met the beautiful, charming young woman from Jerome through her mother Alice, and aunt, Mary Marshall. They all knew John and Rosemary had to meet.  Labor Day was the perfect day for it and Rosemary said when she saw John helping his mother into a carriage, and he turned those blue eyes toward her, she knew this would be the man she would marry. John and Rosemary were married on November 27, 1965, at St. Jerome’s Catholic Church.  It was a beautiful wedding full of friends and family who said they had never seen two people more in love.  They had a memorable reception at Blue Lakes Country Club after the wedding.  The beautiful photos illustrate what a spectacle it was and the love they shared.

They moved to Hailey and Rosemary continued teaching at Bellevue Elementary.  In 1972, they moved to Jerome and with her vision and John’s skills, they built a beautiful farm on “The Butte” which, prior to their arrival, consisted of sagebrush and lava rocks. Some time after her mother’s death, they sold the farm on the Butte and Rosemary and John moved back to her family farm to care for her father, Aloys Hof, and her aunt, Mary Marshall.  John and Rosemary continued to live on the home place until John’s death on September 2016 and Rosemary’s recent death.

Rosemary loved gardening.  She spent many hours caring for her beautiful roses with her best friend of 50 years, Georgia Maldanado.  She also loved all animals, especially the chickens and the dogs that were always a fixture at the farm. Fawn was the first of the dogs to steal Rosemary’s heart, and Tippy was the latest dog she adored. Rosemary was a lifelong, devout Catholic.  Her benevolent acts and donations to St. Jerome and its priests were something to behold. She and John were instrumental in helping with the reconstruction of the new St. Jerome parish, along with their priest and friend, Fr. Ron Wekerle.  Beyond the church grounds, they bought a house in the town of Jerome when a retiring priest asked them to find him a place to live. That was all it took for John and Rosemary to spring into action and find the house. After his residence there, many other priests were welcomed by them to this home. Rosemary and John loved helping the church in any way they could, and their giving spirit transcended the church to other people in need. Rosemary would send presents to Carmelite nuns in Salt Lake every Christmas for many years.  Her packages wrapped with love and care were one of the highlights for every one of the Carmelite nuns.

Rosemary was a saint on earth, though her humble demeanor would never allow her to acknowledge it. Her love and caring of friends and family was something of legend. She loved unconditionally and this love was returned with ease.  Everyone related to Rosemary and absolutely loved her. She was beautiful, graceful, benevolent, and loving.

The entire McGonigal family would agree that having Rosemary in our lives has made us better people, and we are so thankful for her presence all the years we were with her. From the time when she and John were first married to the years spent in Hailey, and all the years they have been in Jerome generously giving of themselves. We will miss her sweet nature and sense of humor. We will miss watching football with her, especially Boise State and Notre Dame, and Gonzaga Basketball games.  She was a very vocal spectator, and the fun was definitely in watching with her!  The joy she brought to us, and many others will be remembered forever. Rest in peace dearest Rosie, your family and friends will never forget you.

Rosemary’s family would also like to sincerely thank Hospice Visions of Jerome for their loving care and support.

In lieu of flowers, please feel free to donate to the St. Jerome Building Fund or Capital Improvements for St. Jerome Catholic Church.

Memories and condolence may be shared with the family on Rosemary’s memorial webpage at www.farnsworthmortuary.com.

To order memorial trees or send flowers to the family in memory of Rosemary McGonigal, please visit our flower store.