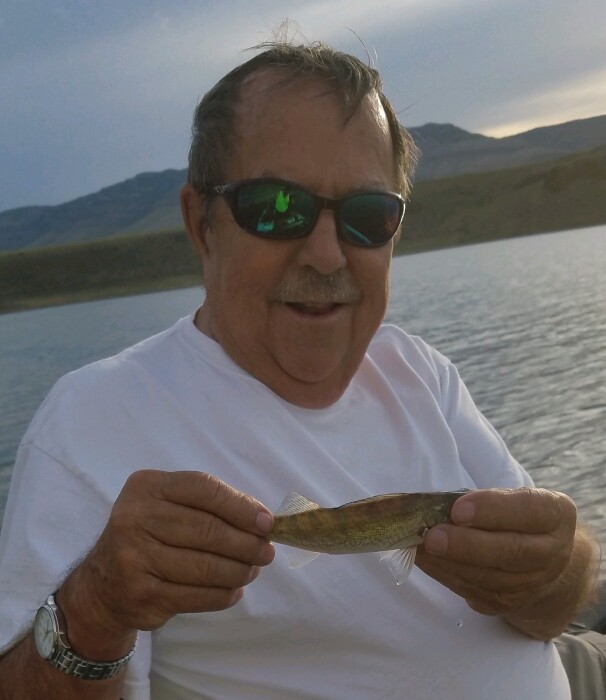 Golf is a great game.  You get to yell “fore” and then hit people with your golf balls.

Ted James Burton, 83, has signed his final scorecard.  On October 24, 2020, Ted played his last round on this earth and headed for the 19th hole and the big Bud Light truck in the sky.

Ted is survived by his incredibly patient and saint-like wife, Linda, who was the love of his life.  He is also survived by his incredible and amazing children: Scott, Shane (Kelli), Richard (Ton), Jeff (Holly), and his “Mokie”,daughter, Kimber (Tony). He also leaves behind a handful of grandchildren who he adored more than anything: Abigail, Avery, Paisley, Cameron, Macie, Lincoln, and Makenzie.  Every single one his grandchildren knew how to fetch grandpa a beer.

Ted was born on October 20, 1937, in Nephi, Utah.  He was raised in Salt Lake City where he earned a name for himself as one of the best boxers in the in the state of Utah.  After losing half an ear in a fight (Evander has nothing on Ted), he met the woman of his dreams at a sporting goods store.  Ted impressed Linda with his “nice guy and athletic persona”.  It was only later that we all found out he had burned down a jail as a teenager.  We were mildly impressed. However, after meeting Linda, all of the toughness began to fade.  The two were married on October 26, (almost October 27 as Ted was late to his own wedding because he was pheasant hunting) and they moved to Jerome, Idaho in 1968 where they raised their family.

Ted entered the sporting goods industry where he fostered his love for hunting and fishing.  And storytelling. On his wall you will find trophies that would send PETA members running for a safe space.  Of those, is a half-eaten salmon.  The other half belongs to a killer whale who surfaced while Ted was bringing it in and took half his bounty.  One of Ted’s favorite places was Alaska. His brother, Ross and nephew, Sean enjoyed taking Ted on wild Alaskan excursions.  He loved the fishing, hunting, and the fact that nobody was on their cell phone due to the poor reception.

As an active Little League coach, Ted nurtured the love of sports in his children.  Ted was a devoted father who taught his children that Little League is serious business and that teenage umpires are not always right.  This love of competition transcended into his adult life as you could easily find Ted on Sundays parked in his chair watching either golf or football with the volume turned up so high that his wife would march in and give the “two-minute warning” on their marriage if he didn’t turn it down.

After spending most of his life traveling for work, he bought the Jiffy Lube franchise so he could remain close to home.  However, he oddly would kiss his wife goodbye, grab his tackle box, and say he was off to work. One of his favorite things to do was to give his children gift cards to his Jiffy Lube store, but it would never cover the cost of the oil change. His sense of humor was amazing.

Ted loved the game of golf.  He often times tried to keep up with his sons on the course which resulted in swings that were so hard and off balance, that picking Ted up off the ground was a normal occurrence.  After leaving the 18th green with grass stains on his clothes, he would harass the servers at the Jerome Country Club.  As it turned out, that became one of his favorite things to do.  They loved him.

The Burtons had many second families thanks to Ted’s magnetic and humorous personality.  Some of his fondest memories include Christmas Eve and Redfish trips with the Fredericksens, more vacations and bonfires with the Junds, and golfing with Muriel.

Away from the family, you would always find Ted with the boys: Jon, Bill, Ben, Rod, Forrest, Tom, and the rest. They were his home away from home.  Ted’s friendships were genuine.  His friends were loyal, and he loved them dearly.

Ted Burton was a devoted father, husband, and friend.  He was the patriarch of the family.  Well, not really, he basically answered to the matriarch and did her bidding.  The love he had for his family was heartfelt and the love he felt for his wife was indescribable.  The void he leaves behind can never be filled.  Although, his final round has been played, the impact he made on those who knew him will be felt forever.  Ted Burton will be sorely missed.

Per Ted’s wishes, there will not be a service but rather a big party in the spring.  Most likely a kegger. However, well-wishers are encouraged to write a note of farewell on a Bud Light bottle and drink it in his honor.

Memories and condolences may be shared with the family on Ted’s memorial webpage at www.farnsworthmortuary.com.

To order memorial trees or send flowers to the family in memory of Ted Burton, please visit our flower store.