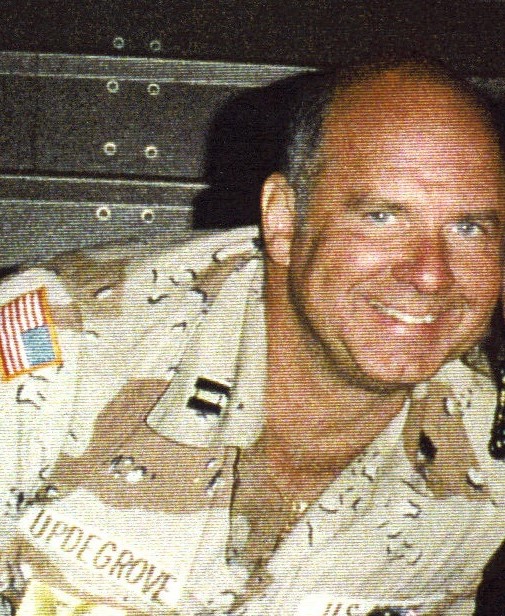 On August 8, 2020, Terry finished his mission on this earth and is now in the arms of his loved ones. He was born to John William Updegrove and Marjorie Elaine Clark on July 6,1948 in Ogden, Utah. A keen intellect, boundless curiosity, endless energy, and a wicked sense of humor served him well through his life. His father chose to make the US Air Force a career, so school began at Eglin Air Force, Florida, continuing at Bitburg AFB Germany and graduation from Douglas High School, Ellsworth AFB S. Dakota in 1966. Winning a swimming/diving scholarship at the University of Utah only enhanced a lifetime of love for all things water.

Sailing, swimming or living near the water was a lifetime passion. An opportunity to spend time with his family at Misawa AFB Japan was irresistible. So, while enjoying time away from college life, the draft notice arrived on the day of the start of the Tet Offensive in Vietnam. He instantly became a new recruit in the US Air Force.  Schooling began in Biloxi, MS for Airborne Radio and Radar Repair and a 30 year career in the US Military was born. Over the years Terry was stationed in Utah, Texas, California, Washington DC, Japan, S. Korea, Saudi Arabia, Kuwait, and Iraq. An adamant student and instructor of medicine, history, warfare, weapons, and electronics opened the way for a continuing career with the US Army in Special Forces, in various capacities including being an Officers Candidate Instructor. He felt this was his greatest accomplishment.

In 1989 while serving at the 96th ARCOM Intelligence section he was selected to attend the Army’s advanced nuclear, chemical, and biological warfare school at Ft. McClellan, Alabama. After finishing this course, he was almost immediately deployed to Saudi Arabia for the start of the Desert Storm conflict, serving in a forward unit 30 miles from the Iraqi border and doing cross border operations for some time after the war had ended. It was there that he was injured and exposed to multiple toxic agents. Despite the great care and best efforts thru the ensuing years, particularly from Dr. Thompson, Boise VA, Dr. Hernanez-Cassis, Las Vegas VA and Dr. Wurthier, Twin Falls VA, the long years of fighting the inevitable ended, and the battle was lost. Terry passed away on a beautiful, sunny, summer day to continue his eternal journey.

Due to the current Covid 19 pandemic there will be no services at this time. A graveside memorial with military honors is planned for the spring of 2021. In lieu of flowers contributions are appreciated at Best Friends Animal Society.

To order memorial trees or send flowers to the family in memory of Terrance "Terry" Updegrove, please visit our flower store.