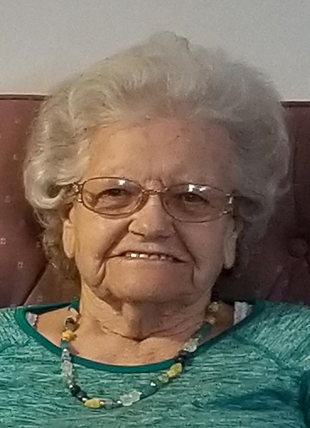 Venna King Riley, age 93, passed away on December 19, 2020, in Jerome, Idaho. Venna was born January 3, 1927 in Garland, Utah, to parents, Ralph Manning King and Lalove Archibald. Her 5 brothers and 2 sisters were born in Garland, Utah also.

The King family loved horses and racing. Venna’s first horse race was when she was 9 years old, which she won. This was the start of many horse races. She was also described as fleet of foot. She came in 1st Place in many of the foot races she entered at fairs in Jerome, Shoshone, and Carey.

She met Ralph Riley Jr. at Richfield High School.  They were married November 28, 1943 and were blessed with two boys and three girls.

She saw her husband off to war and rejoiced when he came home. The two of them ran a farm, participated in their community, and made friends wherever they went. Both were graduates of the Richfield School. One of Venna's cherished memories was when she received an award from the Richfield School for all her years of service. Venna and Ralph were "snowbirds" for a period of time, traveling to southern Utah for the warmer weather and to spend time with the Jaynes part of the family. It was a treasured time watching great-grandchildren grow up and making new friends, and meeting for "coffee" each morning.

Venna was very passionate and talented at crocheting and knitting. She spent many hours creating sweaters and dolls to generously give away.  All of her granddaughters have dolls that she crocheted.  One of her great joys was Bridge Club; she looked forward to it monthly.  Venna was on a bowling team and had so much fun and became good friends with her teammates. Venna was often on the go and kept the road hot. She loved to travel. After flying to Hawaii to visit Wendell and Mary, she decided that she also loved flying.  The County Fair was a special time for Mom. She always entered candy and baked goods and won many a blue ribbon for her efforts.  Every year she would look forward to the Mom and Daughters Retreat, where there was always lots of fun, laughter, exploring and playing games.  Oh, and eating.

Venna was the happiest when she had her family around her.  She was a wonderful loving person and will truly be missed by family and friends.

Given the circumstances, the Ralph and Venna Riley family will be having a brief graveside service for Venna at 2:00 pm, Monday, December 28, 2020 at the Richfield Cemetery, Richfield, Idaho. With Covid, weather and travel to consider, we have decided that this will be a brief service and anticipate setting a celebration of life for Ralph, Venna and Pat Riley when it is safer, sometime next year.

Memories and condolences may be shared with the family on Venna’s memorial webpage at www.farnsworthmortuary.com.

To order memorial trees or send flowers to the family in memory of Venna Riley, please visit our flower store.